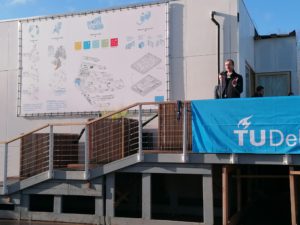 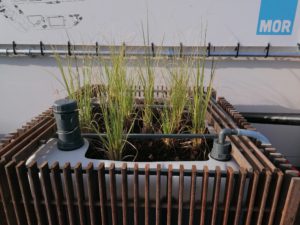 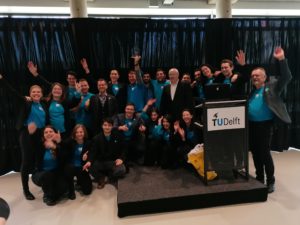 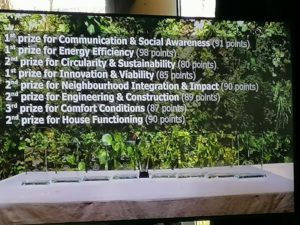 On Wednesday 5 February, Minister Wiebes of Economic Affairs and Climate reopened the MOR Pavilion at TU Delft. Student team MOR had participated in the Solar Decathlon in Hungary with this pavilion and had finished second in the final ranking, but had won several first and second prizes in the interim results. The entire pavilion was built in Delft last year, taken apart for transport to Hungary and then disassembled again and rebuilt in Delft. The team received an additional prize from the Hungarian organization for the team with the most prizes won. Part of the MOR pavillon was a Phytocube® natural waste water treatment system from Rietland. The treatment basins are arranged on a staircase on the outer facade of the pavilion. It will remain here for monitoring for a few more years.

The MOR project is a project in which vacant office buildings are refurbished into sustainable apartments. Part of the whole is also a sustainable water cycle: the gray wastewater is purified via a Phytocube system and then reused for flushing the toilets. For this purpose, Rietland designed a special version of the Phytocube which looks nice in an above-ground arrangement, with a wooden covering and sedge as plants. The system in Delft consists of 3 basins: a pre-settler, the treatment system itself with aeration and then a collection tank for the treated water with a re-use pump. We at Rietland think this Phytocube variant will also be very suitable for, for example, tiny houses and for situations where temporary waste water treatment is required.

After the presentation of the prize, the following team was also introduced, team: Team Sum. They will defend the honor of TU Delft at the next Solar Decathlon Europe 2021 in Wuppertal with a daring concept to make porch flats more sustainable through an extra building shell around the flats. Rietland may also play a role in their submission.