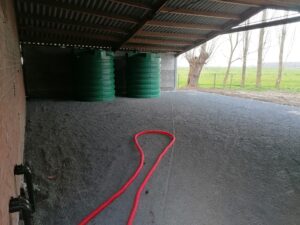 On April 2, 2021 camping 't hof Bellewaerde opened its doors. The campsite can accommodate 29 campers or caravans, 15 tents and 32 beds in the hostel. You really stay here in the warfield of World War I with craters in the landscape and archeology under your feet. Because digging is not allowed in this historically valuable soil, utilities for drinking water and waste water could not be installed. As a solution, Rietland placed one Phytoparking of 76m² for 105 IE under the awning of the existing bicycle shed.

The underground reed bed consists of a separate basin that purifies gray water (waste water from showers and kitchen) and one for black water (WC water) of 44m² and 32m² respectively. In addition, part of the treated waste water is reused as toilet water. Drinking water is also produced on site from rainwater. If the campsite is operating at full capacity during a hot summer, the amount of rainwater may be insufficient. That is why it is being investigated whether purified gray water can also be upgraded to drinking water. Both gray and black water will be monitored for the next 4 years and the University of Ghent is investigating what camping guests think about the reuse of waste water.

The ecological and archaeological impact of this campsite on its surroundings is therefore minimal. This project was realized with our partners' t Hof Bellewaerde, Cofrax, UGent, Vlakwa and Vario under the flag of Flanders Circular. 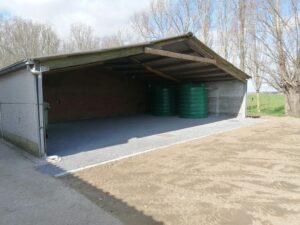